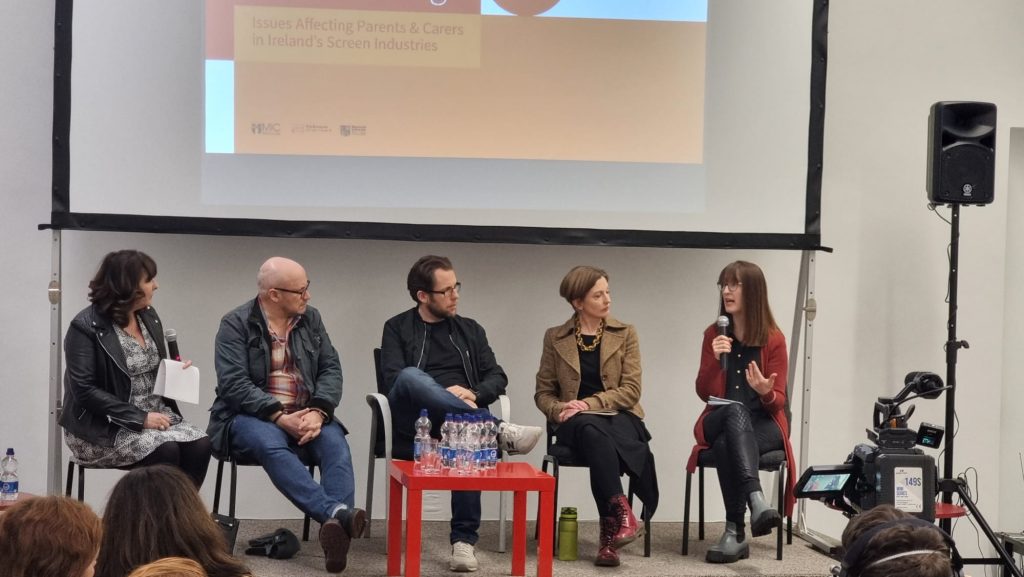 Raising Films Ireland, the Irish chapter of the advocacy and support group for parents and carers in the Irish film, television and animation industry, today launched a ground-breaking research report entitled The Pursuit of Change: Issues Affecting Parents and Carers in Ireland’s Screen Industries, which aims to address challenges within Ireland’s screen industry.

The report reveals major problems for carers and parents working in an industry characterised by freelance contracts, with long unsociable hours and ever-changing schedules.

The report was launched at a sold out event at the Dublin International Film Festival attended by director Lenny Abrahamson (Normal People), writer and actor Jody O’Neill (What I (Don’t) Know About Autism), documentary director Anna Rodgers (How to Tell a Secret), and producer Macdara Kelleher (Foundation) and is based on detailed research in which almost 500 individuals participated.

The results of the research highlighted a cultural bias and very clear barriers for parents and carers, affecting women disproportionately. The major challenges identified in the report are as follows:

We must sustain the talent and skill that we have all worked so hard to cultivate. If we really believe in building a diverse, equitable and inclusive industry, these challenges need to be addressed. “

Dr. Susan Liddy, Board Member, Raising Films Ireland and co-author of the report said: “The Pursuit of Change Report is a game changer because it provides us with an insight into the experience of parents and carers in the screen industries that we didn’t have before. It holds a mirror up to the challenges they face on a daily basis. It is clear that there is a pressing need for cultural change and work practices must be looked at with some urgency.

A range of solutions, supported by industry workers, should also be explored so that skilled and committed professionals will not be forced to choose between work and family. But it is important to be clear that these are huge issues impacting many sectors of Irish society. There are limits to what the screen industries can accomplish alone, without government support. Achieving root and branch change is beyond the scope of any one sector. Nonetheless, I’m confident that there is a real desire to create meaningful change and much can be achieved.”

The Pursuit of Change also highlights the desire for broader cultural change and the need to intensify debates about caring in our industry. Those affected by these major problems call for an end to the climate of silence and invisibility around caring and carers, specifically within our screen industries.

The report outlines the strong desire expressed by respondents for structural change and offers a number of potential solutions. Innovative starting point ideas of how to bring about real change included the following:

You can read the full report at www.raisingfilmsireland.com

Dr Susan Liddy is available for interview and may be contacted at Raising Films Ireland info@raisingfilmsireland.com.Notes to Editors: The research team was led by Dr Susan Liddy, a lecturer in the Department of Media and Communication Studies in MIC, (University of Limerick), Chair of Women in Film and Television Ireland and a Board member of Raising Films Ireland. The team also includes Dr. Anne O’Brien (MU) and Fergal Rhatigan (MU). It has been supported by Screen Ireland.

Respondents. The survey was completed by 455 respondents. The vast majority live in Leinster, with over half in Dublin. 76% of respondents are female, 23% male. 61%* of respondents are freelancers or self-employed, and working in a variety of positions across the industries; writer, director, producer, and in a range of roles categorised as ‘crew’. This high percentage of freelance workers is indicative of the nature of the screen industries, not only in Ireland but internationally. 73% have caring responsibilities. Of those with caring responsibilities, 79% are caring for children.